memories of the ’80s – My Favorite Year 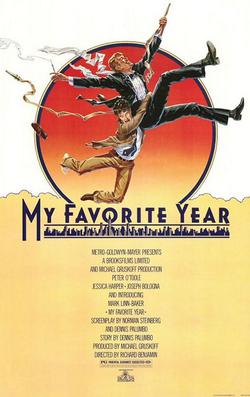 This early 1980s comedy is a flashback for a young writer when he met his favourite actor in My Favorite Year.

As Swann and Stone get to know each other, they both reveal their estranged relationships with their families.

Swann also tries to help Stone with his hapless attempts at wooing co-worker K.C. Downing (Jessica Harper), while Stone helps Swann with fear of performing live and a corrupt union boss who finds out he is being made fun of by Swann on stage.

The film, executive produced by Mel Brooks, was loosely based on a story heard by writer Dennis Palumbo about Brooks’ brief interaction with Errol Flynn when he made an appearance on Sid Caesar’s television show, which Brooks was a writer, and based Benjy Stone’s character on Woody Allen.

This was the first directing role for actor Richard Benjamin, who had starred in Westworld and The Sunshine Boys.

Released in October 1982 by MGM/UA Entertainment, My Favorite Year got rave reviews from critics, especially for the performance by O’Toole who captured the balance of a self-involved actor with his fear of the future and getting old.

O’Toole was nominated for Best Actor his role in 1983 and the film went on to make US$20 million at the box office,