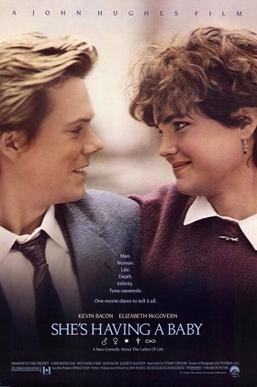 The late 1980s brought this romantic comedy to the big screen: She’s Having A Baby.

Written and directed by John Hughes, the story focuses on the beginning of the marriage between Jake and Kristy, played by Kevin Bacon and Elizabeth McGovern.

The story begins with the duo getting married, moving to New Mexico for Jake to finish his master’s degree.

But he decides to quit and the twosome return to Chicago where Jake get a job in advertising.

Alec Baldwin plays Jake’s best friend, who reassures Jake about his life and marriage, although telling him he won’t know but he will be happy.

Jake is focused on himself, unsure about being a husband, and fantasizes about having an affair. He also then faces the reality that his wife has stopped taking birth control several months ago but hasn’t become pregnant, but its because of him.

As Jake begins to realize he’s been selfish and immature, he and Kristy face a difficult pregnancy and the stress of becoming parents.

Paramount Pictures released She’s Having A Baby on February 5, 1988, a rom-com with a twist from the well-established Hughes.

The critics didn’t love the film and it underperformed in the US upon release, despite strong performances by Bacon and McGovern.

The film did have a memorable soundtrack, including songs by XTC, Kate Bush, Kristy MacColl, Gene Loves Jezebel,  Love and Rockets and Everything but the Girl, with instrumental music by Stewart Copeland.

A pop culture junkie with a penchant for exploring our planet.
View all posts by Waheeda Harris →
This entry was posted in Pop culture and tagged 1980s, 1988, Elizabeth McGovern, film, John Hughes, Kevin Bacon, movie, Pop culture, rom-com, She's Having a Baby. Bookmark the permalink.