Posted on February 6, 2020 by Waheeda Harris 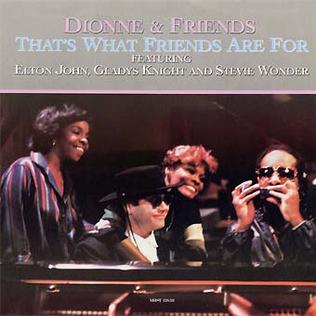 The mid 1980s brought a second version of That’s What Friends Are For to burn up the charts and lend a helping hand to charity.

Written by Burt Bacharach and Carole Bayer Sager, the song was first recorded by Rod Stewart in 1982, for the soundtrack of the film Nightshift.

In 1986, Warwick with Gladys Knight, Elton John and Stevie Wonder recorded the song and released it as a charity single in support of research to find a cure for AIDS to benefit the American Foundation for AIDS Research.

On the single, John played piano while Wonder played harmonica. Produced by Bacharach and Bayer Sager, the song was released in October 1985 on Arista Records.

The single helped raised millions for AIDS as well as garnering a Grammy for Best Pop Performance by a Duo or Group with Vocals as well as Song of the Year for Bacharach and Bayer Sager.

In 1990, a benefit concert That’s What Friends Are For: Arista Records 15th Anniversary Concert was held at Radio City Music Hall featuring many Arista performers and Warwick and her cousin Whitney Houston performing the song as a finale.