memories of the ’80s – The Falcon and the Snowman 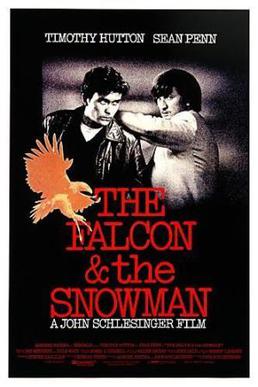 The mid ’80s brought to the big screen a thriller based on a true story: The Falcon and The Snowman.

Directed by John Schlesinger, the film starred Timothy Hutton and Sean Penn, who star as two Americans who try to sell US government secrets to the Soviet Union.

Based on the book The Falcon and the Snowman: A True Story of Friendship and Espionage by Robert Lindsay, the story begins with Timothy Hutton as Christopher Boyce, the son of an FBI employee, who gets a job at the “Black Vault” a secret communication facility.

As he learns of the US government decisions, Boyce feels they are misguided and decides to sell the secrets he learns to the Soviet Union. He uses his pal, Andrew Daulton Lee (Penn), who is a cocaine addict living in Costa Rica  to help him contact the Russians.

Lee agrees to do it for the money, and the duo travel to Mexico City to make contact with the Russians. As Boyce continues to dangle his sensitive information to a Russian contact he is also worried about Lee’s increasing addiction which makes him a risk.

Based on a screenplay by Steve Zaillan, the film was released in January 1985, and was critically-acclaimed, although didn’t make much dent at the box office. Penn was universally praised for his portrayal of Lee, portraying him as someone who wants to survive, not as a victim or addict.

And David Bowie with the Pat Metheny Group, did the film’s main song, This is Not America, which hit number 32 on the Billboard Top 100 in spring 1985.

A pop culture junkie with a penchant for exploring our planet.
View all posts by Waheeda Harris →
This entry was posted in Pop culture and tagged 1980s, 1985, book, drama, film, John Schlesinger, movie, Pop culture, Sean Penn, The Falcon and the Snowman, thriller, Timothy Hutton. Bookmark the permalink.