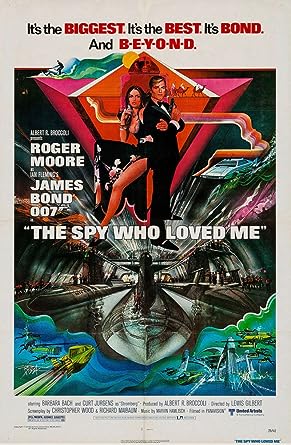 In 1977, James Bond came back to the screen with Roger Moore in the memorable The Spy Who Loved Me.

This was Moore’s third time as the British spy, and although based on the Ian Fleming book of the same name, the storyline of the film was completely different from the book.

The two governments are tipped off to some intrigue when British and Russian submarines are disappearing. Bond and Amasova are both in Egypt trying to get the microfilm that has plans for a new submarine tracker and encounter assassin Jaws.

Saving Amasova from Jaws, the two spies report their findings, realizing they may have to work together to get rid of their new nemesis: Karl Stromberg. A reclusive meglomaniac, his goal is to destroy Moscow and New York City, and create a new civilization under the sea.

After surviving his attack, their governments allow them to team up to discover Stromberg. The two discover Stromberg’s lair and go up against Jaws again, but also discover what they need to do to defeat him. Amasova also reveals she was the lover of a Russian spy who Bond killed.

Produced by Albert R. Broccoli and directed by Lewis Gilbert, who had previously directed You Only Live Twice, which starred Sean Connery, The Spy Who Loved Me had all the Bond themes: a smart villain threatening to destroy the world, beautiful women, exotic locations and plenty of gadgets including a Lotus Esprit sportscar which converts to a submarine.

The film’s location included Sardinia and Costa Smeralda in Italy, Cairo and Luxor in Egypt, underwater scenes filmed in The Bahamas and new sound stage in England called Pinewood Studios for many interior scenes.

Released in July 1977 in the UK and North America, the film was heralded as a return to the standard of Bond films and was a runaway favourite with fans, earning US$185 million at the box office.

The film also was nominated for three Academy Awards and helped cement the franchise as still as popular as ever with Roger Moore leading them into the next decade.

A pop culture junkie with a penchant for exploring our planet.
View all posts by Waheeda Harris →
This entry was posted in Pop culture and tagged 1970s, 1977, action, adventure, Barbara Bach, film, James Bond, movie, Pop culture, Roger Moore, spy, The Spy Who Loved Me. Bookmark the permalink.