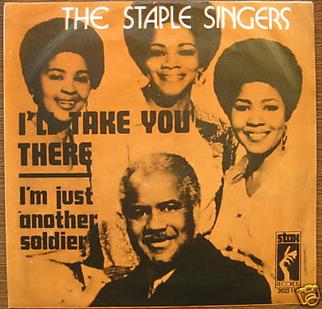 In 1972, a girl group’s song caught fire on the Billboard charts with I’ll Take You There.

Recorded in 1971 at the famous Muscle Shoals Studio in Alabama, the song was written by the album’s producer Al Bell, and was the second time The Staple Singers worked with Bell.

He had produced their previous album when they were called The Staple Swingers, and then worked with them again on Be Altitude, Respect Yourself as they relabelled themselves The Staple Singers.

After releasing Respect Yourself, the first single from the album in 1971, Stax Records released I’ll Take You There in February 1972.

Spending 15 weeks on the chart, the single hit number one in June 1972, thanks to the steady support of radio airplay. The song’s distinctive call and response style was familiar to the African-American audiences and was a call to ascend to heaven.

The Staples Singers were known for songs that referenced faith, social issues and civil rights. The song also charted on the Billboard R&B charts for four weeks in May 1972.

According to Rolling Stone critic David Fricke, the song epitomized the sound of Muscle Shoals, now a known signifier in memorable pop music.

In 1999, the song was inducted into the Grammy Hall of Fame, and remains one of the group’s best known songs.