memories of the ’70s – Danny, the Champion of the World by Roald Dahl 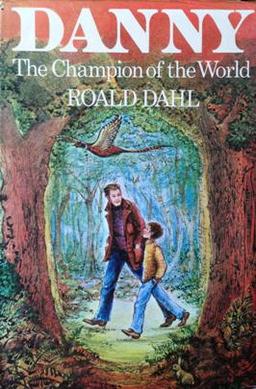 In 1975, Roald Dahl wrote a children’s book based on an adult short story and made a hero in Danny, The Champion of the World.

In 1959, Dahl published a short story in the New Yorker Magazine titled Champion of the World, about adults and how they are poaching from the rich to feed themselves.

Fast-forward to the mid 1970s, where Dahl took the story and focused it on young dDanny, who is being raised by a single Dad after his Mum died when he was an infant. They live in a caravan in the forest in England.

He soon realizes that his Dad goes out at night to poach birds from the neighbouring lands and that his grandfather was also a poacher.

One night he wakes to find out his Dad hasn’t come home. He finds his Dad caught in a trap set by wealthy landowner Mr. Hazell on his property and rescues him, but his Father now has to recuperate at home with a broken ankle.

Upset at Mr. Hazell, Danny decides to sabotage his annual pheasant hunt to impress the local lords and ladies by drugging the pheasants and hiding them so there will be no birds to hunt. He works with the village doctor to get sleeping pills to kick off his plan.

Sneaking drugs inside raisins, Danny captures all the pheasants and then works with Mrs. Clipstone, the wife of the vicar, to hide the birds. But does he succeed? And will the village protect him from the outrage of Mr. Hazell?

Published in 1975 by Jonathan Cape in the UK, the book was published in North America by Alfred A. Knopf.

Dahl, who had begun his writing career while living in the US, started writing for kids when he had moved with his family to England, and dedicated those books to his kids. He owned a vardo, a traditional Romani home, and used it as a writing room for when he was working on Danny, The Champion of the World.

When I read the book as a kid, I was sympathetic to Danny and his Dad, who were trying to make ends meet and didn’t fit in with the rich kids.

And foreshadowing happens in this popular (and very successful novel) with the Dad telling Danny a bedtime story, which became the novel, The BFG. This novel became a film in 1989 starring Jeremy Irons.

A pop culture junkie with a penchant for exploring our planet.
View all posts by Waheeda Harris →
This entry was posted in Pop culture and tagged 1970s, 1975, book, Danny The Champion of the World, fun, humour, kids book, literature, novel, Pop culture, Roald Dahl. Bookmark the permalink.