memories of the ’70s – Real People 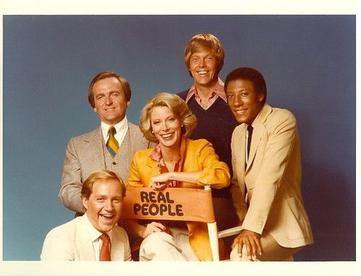 At the end of the 1970s, tv talk show, news and reality tv combined in a popular television series called Real People.

Debuting in 1979 on NBC TV, the series was the idea of producer George Schlatter, who had previously worked on comedy series Rowan & Martin’s Laugh In.

The premise of the show was showcasing ordinary Americans and their jobs or hobbies. A panel of hosts discussed each pre-taped segement and occasionally they would have someone in studio to discuss their career or past time.

A popular segment was funny pictures and newspaper errors sent in by viewers, which if aired won them a Real People t-shirt.

NBC Television was at the time the number three network, and desperately needed the ratings, which came because of this series, which viewers adored. Rival networks created imitations including ABC’s That’s Incredible! and CBS’s That’s My Line.

But the NBC original series did well in its first three years, gaining audience and encouraging viewers to participate long before social media, by constantly writing in with funny things from their world.

One of the most notable people to come out of Real People is fitness fun guy Richard Simmons, who was profiled on the show, and his popularity led him to his own television show.

And its still standard for television news and talk shows to air these segments. Isn’t the basis of reality television our fascination with ourselves and other people’s lives?