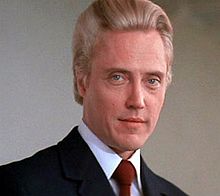 In the 1980s, the last James Bond film made by Roger Moore showcases a memorable villain: Max Zorin.

Based on an Ian Fleming short story From a View to a Kill, the screenplay for A View to a Kill is original, written by Michael G. Wilson and Richard Maibaum, who created Zorin.

Max Zorin is an East German who is a product of Nazi experimentation. He moves to France to make his money in technology but in his past is the experiments that were trying to make super children with steroids.

The screenplay reveals Bond’s latest mission: he is sent to recover the body of 003 and a microchip in the Soviet Union. Examined by Q, the microchip was created by Zorin Industries, a billionaire and lover of race horses.

At Ascot, Bond meets Zorin (played by Christopher Walken) as well as a French PI named Aubergine who tips him off to Zorin’s connections and his secret horse auction. But then Aubergine is killed, by Zorin’s lover/henchwoman May Day (Grace Jones), with Bond learning Zorin is secretly enhancing his race horses with steroids to create winners.

As Bond pursues Zorin for his nefarious plan, Zorin attempts to have him killed by May Day, to keep his KGB supporters happy. As the plot thickens over Zorin’s creation of a bomb plot to destroy California and take control of industry, May Day eventually realizes she is expendable, and helps Bond go after Zorin.

Released in 1985, A View to a Kill follows a similar thread of other Bond films of a conflict, a greedy billionaire who becomes a villain and his use of a side kick to go after his enemy, yet in the end, the side kick leads to his downfall.

Walken’s portrayal of Zorin is quintessential Walken style, with a bit of flash and a lot of ingenuity to fuel his dastardly plans.