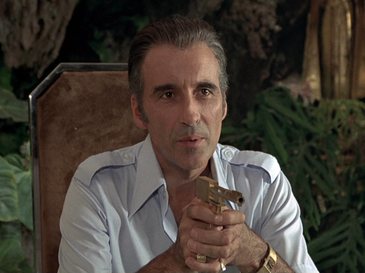 In the 1970s, the James Bond film series had a noted villain who was almost as beloved as the lead: Francisco Scaramanga.

Created by Ian Fleming, the character first made his appearance in the book Diamonds are Forever.

Scaramanga is a young Catalan who learned unique skills from performing in the circus in Europe and becomes a hit man for the Mafia as a teenager.

In films, Scaramanga is an anonymous freelance assassin, making his first appearance on screen in the Man with the Golden Gun, as a hitman who is paid $1 million per kill, and is noted for his use of gold bullets.

His film bio closely follows his book bio, although he’s recruited by the KGB after his time in a travelling circus and leaves them when he realizes he isn’t valued as an individual.

Now he lives in isolation on an island off the coast of China and has his side kick Nick Nack (played by Herve Villechaize) as his accomplice and servant. Nick Nack often hires assassins to attempt to kill his boss to keep his skills sharp and his high price for his work enables him to live in luxury and have the ultimate toys created like a laser canon and an airplane that transforms into a car.

Scaramanga and Bond are frenemies, as he understands Bond since he is employed by the British Government the same way he was employed by the Russian Government. But alas their friendship must end, as he is hired to kill Bond by crime lord Hai Fat.

Played by Christopher Lee on screen, Scaramanga’s relationship with Bond may only be for one film, but his complicated past made him a memorable villain of the Bond canon.