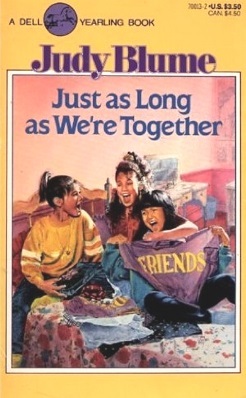 The late 1980s offered another memorable coming of age novel from Judy Blume: Just as Long as We’re Together.

Narrated by 13 year old Stephanie Hirsch, the storyline focuses on the numerous changes that are happening in her life – like starting middle school and trying to understand why her parents have split.

Stephanie’s also gaining weight, beginning to menstruate and is now thinking about hunks aka boys.

She’s also feeling a bit confused. A new girl has moved into the neighbourhood – Alison – and she really likes her. Despite Alison’s Mum being a famous actress, Alison is down to earth, fun and they click.

Blume focuses on the myriad of things that happen to a girl when she becomes  a teenager – her physical and emotional changes, as much as those day to day things of being a teenager and dealing with friendships, a new school and changes to her family.

Published in 1987 by Orchard Books and then in paperback by Dell/Yearling Books, this novel became another fave in the Blume bibliography, addressing those common issues of being a teen girl.

A pop culture junkie with a penchant for exploring our planet.
View all posts by Waheeda Harris →
This entry was posted in Pop culture and tagged 1980s, 1987, book, books, Judy Blume, Just as Long as We're Together, literature, novel, Pop culture, teen life, teenagers, YA, young women. Bookmark the permalink.