memories of the ’70s – Fame by David Bowie 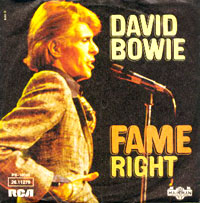 A collaboration with another famous musician was the basis of this song becoming a number one hit in 1975: Fame by David Bowie.

The duo jammed at Electric Lady Studios in January 1975 and their collaboration on a riff created by musician Carlos Alomar inspired Bowie to write Fame. Since he was in the middle of ending a relationship with manager Tony Defries, the song was an angry retort at the situation and at the price of popularity.

Leaving behind the glam rock sounds, Bowie wanted a more soulful sound on Young Americans and with Fame, focused on bringing in the funk sounds he was hearing from American bands.

Added to the tracks for Young Americans, Fame was the second single released from the album after the title track, and was one of two songs that included contributions from Lennon.

Fame was released as a single in July 1975 by RCA Records, and was Bowie’s first number one chart hit on the Billboard Hot 100, climbing to the top spot in October 1975.

The song was certified gold in Canada and the US and was followed by the third successful single, Golden Years from Young Americans.