memories of the ’80s – Bette Davis Eyes by Kim Carnes 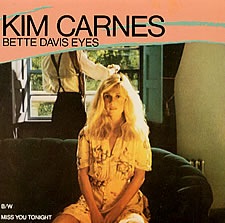 Written and composed by Donna Weiss and Jackie DeShannon, the song was originally performed by DeShannon for her album New Arrangement in 1974.

Carnes chose the song for her album Mistaken Identity, her sixth studio album, and her most successful. The single was released in March by EMI America, and climbed the Billboard charts, hitting number one in May 1981.

The single spent 26 weeks on the chart, and had nine weeks as the number song on the Billboard Hot 100.

At the end of the year, Billboard chose the song as the overall number one song of 1981, the song was nominated for the Grammy Award for Album of the Year and was certified platinum.

Carnes went on a stadium tour for Mistaken Identity on the strength of the hit single and consequent singles and won the Grammy Award for Song of the Year and Record of the Year for Bette Davis Eyes.