Posted on September 4, 2018 by Waheeda Harris 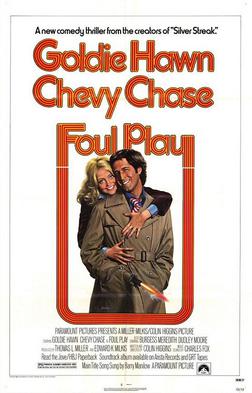 The late 1970s bought a comedic small screen tv star to the big screen with the comedy/mystery film Foul Play.

Written  and directed by Colin Higgins, the film was the movie debut for actor Chevy Chase, who had made his name on television with a starring role on Saturday Night Live.

Hawn plays librarian Gloria Mundy, who takes a chance and goes out with a guy meets on the side of a road named Scotty (played by Bruce Solomon). He secretly passes information to Gloria, but she isn’t aware.

But Scotty isn’t all he seems – and when he meets her at the movie theatre for a date, he tells her not to trust a dwarf and then dies from wounds. And Gloria tries to alert the movie theatre manager of his death, but his body disappears.

Gloria keeps encountering people trying to kill her, obtain the secret inf oand tries to convince Tony, who soon realizes she isn’t making up far-fetched tales of dwarfs, albinos, avoiding a ladies man (the American debut of Dudley Moore) and being kidnapped.

But who is Scotty and what does Gloria have that everyone wants?

Written as an homage to Alfred Hithcock, Collins wrote the film for Hawn, but the studio wasn’t interested. He rewrote the script and Paramount Pictures wanted Farrah Fawcett, but she was unable to do it because of her contract issues with the TV series Charlie’s Angels.

Higgins offered the male lead to Harrison Ford and Steve Martin before casting Chase, and in early 1978 was filmed in San Francisco. Released in July 1978 by Paramount Pictures, the reviews were positive and the Chase’s big screen debut did well at the box office, with sales of over US$44 million.

The film’s theme song Ready to Take a Chance Again, performed by Barry Manilow and written by Charles Fox and Norman Gimbel was nominated for best song at the 1979 Academy Awards.

The film was also nominated for six Golden Globe Awards, include best picture – musical or comedy, best actor, best actress and best supporting actor for Moore, who went on the next year to make Blake Edwards film 10.