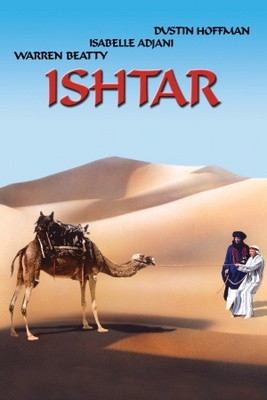 The late 1980s brought a buddy film to the big screen which became notorious for its failure: Ishtar.

Written and directed by Elaine May and produced by Warren Beatty, the film starred Beatty and Hoffman as two songwriters who travel to Morocco and get embroiled in a secret CIA operation.

Lyle Rogers (Beatty) and Chuck Clarke (Hoffman) are desperate for some success and take the advice of their agent Marty and take a job in Marrakesh, Morocco to kickstart their careers, despite the fact that there is a political unrest in the region.

Rogers and Clarke head off to Marrakesh by way of Ishtar, a neighbouring country. Clarke meets a mysterious woman named Shirra (Isabel Adjani) who asks for his passport and after he lends it to her, finds out it will take some time to get a new one from the embassy.

As Rogers heads off to Morocco to insure they still have their gig, Clarke stays in Ishtar and meets a CIA agent, Jim Harrison (Charles Grodin), who promises to get him across the border.

Rogers and Clarke both are being used by the CIA, Shirra and leftist guerrillas, as a CIA secret operation could be exposed and they may now be involved in a plot to overthrow the Emir of Ishtar.

May had wanted to make a buddy film like had been done by Bob Hope and Bing Crosby in the past, casting the stars against type for comedic value and set in the Middle East.

Beatty and Hoffman both felt they owed May, who played a role in the success of their past films – Heaven Can Wait and Tootsie – but initially were not impressed by the script, but with some edits and additions, both agreed to the project.

With a budget of US$27.5 million, filming began, with Beatty and Hoffman  given $12.5 million before principle photography, which they refused, but Columbia Pictures said it was unnecessary as they had plenty of money for investment in the project.

As well, because of a prior investment by parent company Coca-Cola, the production company went to film in the Sahara Desert as opposed to saving money and filming in the US Southwest. There was a lot of tension in this part of the world, because of attacks between Israeli Forces and the Palestine Liberation Organization, which had an office in Tunisia.

The budget began to spiral and even before release, the film’s excesses were well-known thanks to regular leaks to the media of on the set problems and continued spending. The final budget of the film hit US$51 million, an increased of US$23.5 million.

Released by Columbia Pictures in May 1987, the film was panned by major critics and was eventually chosen as the worst film of the year by Siskel and Ebert at The Movies, as well as nominated for three Golden Raspberries.

Coca-Cola reassessed its role in entertainment, eventually selling it two years later to Sony Pictures. And Ishtar became one of the worst films of 1980s, earning only $14 million at the box office.