memories of the ’70s – Heaven Can Wait 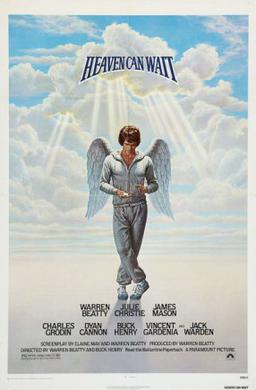 The late 1970s brought a unique drama/comedy to the big screens with Heaven Can Wait.

Directed by Warren Beatty and Buck Henry, the story was based on the book of the same name by Harry Segall.

Elaine May and Beatty adapted the book for the screenplay; previously it had been made into the 1941 film Here Comes Mr. Jordan.

Beatty was also the lead:  Joe Pendleton, a back-up quarterback for the Los Angeles Rams, who while cycling around LA, is spotted by an over zealous guardian angel as someone who is possibly about to die, and is brought to Heaven.

Pendleton is not convinced he was supposed to die and demands an investigation by the man in charge of the afterlife, Mr. Jordan. And Pendleton is right – the angel has made a mistake, and Pendleton was not scheduled to die. But he can’t be returned to his body as it has been cremated.

Offering a way to get back to Earth and become human again, Pendleton is asked to take over the body of billionaire Leo Farnsworth. He’s been drugged and drowned by his wife Julia (Dyan Cannon) and his secretary Tony (Charles Grodin).

Joe becomes Leo, freaking out Julia and Tony who had murdered him to gain control of his money. Ignoring their confusion, Joe/Leo decides to buy the Los Angeles Rams and become their new quarterback, convincing his former trainer Max (Jack Warden) that he is Joe now in Leo’s body.

Joe/Leo meets environmentalist Betty (Julie Christie), who had been fighting with Leo about his anti-environment stance, but is attracted to her, which she finds very confusing. Meanwhile Julia and Tony continue their plot and shoot Joe/Leo. Is he really dead this time?

Current and former football players of the era and sportscasters were included in the film including Bryant Gumbel, Curt Gowdy, Al DeRogatis and Dick Enberg.

With a budget of US$15 million, Beatty and company filmed all over Los Angeles, including a pre-game of the LA Rams versus San Diego Chargers for the film.