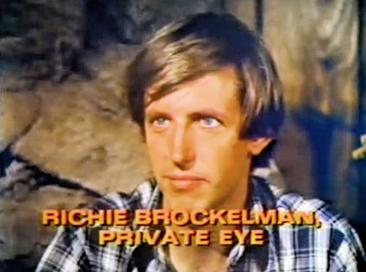 For the creative mind of Stephen J. Cannell, there were many successes but also a few misses, like Richie Brockleman, Private Eye.

Cannell and Steven Bochco came up with the idea of Brockleman, a private investigator who would be unlike his colleagues – 22 years old, college educated and never uses a gun.

Played by Dennis Dugan (who was 31 at the time), Richie Brockleman was persistent and felt he could talk his way out of any situation, would often help or meet young women, but would never end up with the girl.

Pitched to NBC as a series, the network said no after seeing the 90 minute pilot episode. Cannell went to plan B, rewriting the final episode of the season for The Rockford Files.

The two hour finale had Brockleman work with Rockford to solve the murder of a veteran PI they both knew.

NBC said yes to the series, allowing five episodes to be completed and shown. The series began airing on March 17 1978, but its lack of ratings led it to be cancelled after the five had aired.

Cannell’s success with The Rockford Files continued while he went back to the drawing board to create another new series.