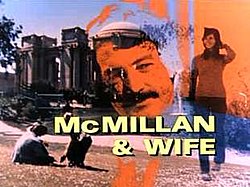 The early 1970s brought a film star to television to be paired with a young actress to solve crimes in San Francisco in McMillan & Wife.

Part of the NBC Mystery Movie series, executive produced by Leonard B. Stern, the show was one of three that debuted in September 1971, including McCloud and Columbo.

Starring Rock Hudson as Police Commissioner Stuart McMillan and Susan Saint James as his wife Sally McMillan, the duo were often the ones to investigate crimes, thanks to his wife’s curiosity.

Hudson was well-known, having been a film star for the previous two decades while this was Saint James’ starring role after a successful run in the The Name of the Game tv series.

Appearing at various A list society soirees, the duo are often the first on the scene, whether it be a murder, burglary or another crime, and started the investigative problem.

John Schuck played Sergeant Charles Enright who would often be the right-hand man to the police commissioner, while the duo’s feisty and hard-drinking housekeeper Mildred, played by Nancy Walker, was often a sarcastic and smart commentator on their investigations and silent helper to Sally.

For five seasons, the successful NBC TV series continued, the chemistry between Hudson and Saint James keeping viewers happy with their constant banter and her instincts just as accurate as his in pursuing criminals.

In the last season, Saint James was no longer on the series after NBC failed to offer her a contract and the series ran for a year with Hudson and a different cast of secondary characters.

The series overall kept airing in re-runs throughout the next decade and has always been a favourite of the 1970s for its couple showing their investigative powers.