memories of the ’80s – Tiger Eyes by Judy Blume 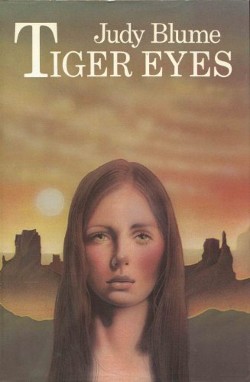 The young adult novel focuses on Davey Wexler, which as the book opens, has attended her Father’s funeral.

Adam Wexler has died after being shot in a robbery in the convenience store he managed in Atlantic City.

Her Mum Gwen and brother Jason are both in mourning, trying to understand what has happened to their family, with Davey spending days in her room.

But she has to start 10th grade, and when she goes to school, Davey passes out. She is diagnosed by the family doctor with panic attacks.

Gwen is suffering from depression since her husband’s death, but she knows that she must do something for the family and decides to take them to Los Alamos, New Mexico to spend time with her sister and brother in law, Bitsy and Walter.

Davey and Jason are treated like Bitsy and Walter’s kids, and Davey resents it, while her Mum tries to get better, getting a job and seeking therapy and convinces Davey to seek therapy too.

Davey escapes the daily trappings of their new home by exploring Los Alamos on bike. During her cycling, she decides to hike into a canyon and meets Wolf, an older teen, and she introduces herself as Tiger.

Davey befriends Wolf, who helps her not feel alone anymore. She also makes a new friend in Jane as both work at the local hospital, where she meets Wolf’s Father, who is dying of cancer. Davey also seeks out therapy and begins to heal and mourn her Father.

Published in 1981 by Bradbury, this novel focused on death and mourning, and how mother and daughter slowly figure out how to deal with the death of Adam Wexler and forge new friendships.

The book was given the Dorothy Canfield Fisher Children’s Book Award for a new American children’s books. And it also is on the American Library Association list as one of the 100 Most Frequently Challenged Books.

A pop culture junkie with a penchant for exploring our planet.
View all posts by Waheeda Harris →
This entry was posted in Pop culture and tagged 1980s, 1981, bestseller, book, Judy Blume, literature, novel, Pop culture, Tiger Eyes, YA, young adult. Bookmark the permalink.