memories of the ’80s – Seasons Change by Expose 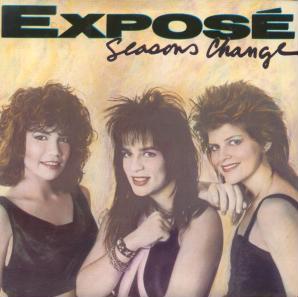 The late 1980s brought another girl group to the charts with the song Seasons Change by Expose.

The trio recorded two successful singles, Point of No Return and Exposed to Love, both successes on the Billboard Hot Dance Club Play chart.

But when it came time to go further, conflicting reports claimed the singers quit, were fired, were not wanted by big label Arista Records or were replaced by Martinee.

But it was the song Seasons Change that propelled Expose into heavy rotation on radio, MTV, dance clubs and to the top of the Billboard Hot 100 in February 1988.

Written by Martinee, the song was a blend of pop and R&B, with a Latin flavour and also went to number one on the Adult Contemporary charts.

Their popularity soared, with appearances on Solid Gold and Showtime at the Apollo TV shows, receiving a nomination as the Soul Train Best New Artist Award and tapped to be the opening act for Lisa Lisa and Cult Jam’s national tour in 1988.

But behind the scenes, there were many issues, with band members claiming to be paid only $200 per appearance and suing the producers for a better contract. After the lawsuit was settled, Expose continued its success with more pop hits as the decade came to an end.