memories of the ’70s – Mommie Dearest by Christina Crawford

Posted on February 6, 2018 by Waheeda Harris 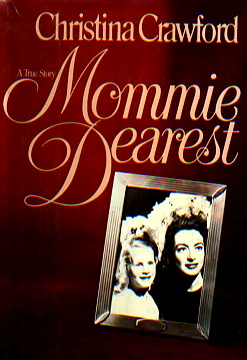 In 1978, the adopted daughter of Hollywood A lister Joan Crawford exposed her horrible childhood in the memoir A True Story: Mommie Dearest.

Published by William Morrow & Co. in October, the hardcover memoir was the talk of the town upon publication, because of its numerous revelations about the private life of Joan Crawford.

The author alleged that her Mother was cruel and abusive, isolating her from other children and placing her in a series of boarding schools with the strict instructions to keep her away from people.

Joan Crawford was portrayed as a woman who adopted children to make herself look better and in private, physically and emotionally abused Christina and her brother Christopher. Christina also alleged that her Mother had regular affairs with both men and women.

One notorious story from the book was how the star overreacted after seeing wire hangers in her daughter’s closet and would regularly dispose of her children’s belongings as punishment.

After publication, many fellow stars, such as Van Johnson, Barbara Stanwyck and Bob Hope said that Christina had embellished the reality of her relationship with her Mother, and that although Crawford was an alcoholic, she didn’t act as portrayed in the book.

Two other children adopted by Crawford also disagreed with the book’s portrayal of their mother, but Christopher always supported Christina’s book and all the stories within it.

Entertainment columnist Liz Smith wrote that she believed Crawford was vain and selfish but felt the stories were too over the top to be believed, while Crawford’s personal secretary Betty Barker said was accurate and that Christina and her brother were not abused.

Friends of Crawford like Helen Hayes and Betty Hutton verified some of the stories, knowing their friend’s temper while Mildred Pierce co-star Eve Arden believed that Crawford may have been bipolar and could have had a personality disorder.

A result of the popularity of the memoir was a biopic, where Faye Dunaway played Crawford and distributed by Paramount Pictures, the only movie studio to not work with Joan Crawford.