memories of the ’80s – Here I Go Again by Whitesnake 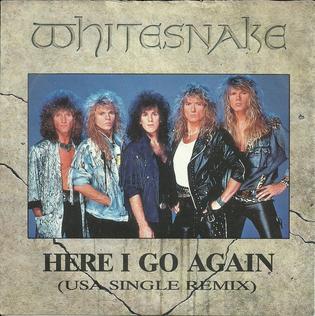 For metal band Whitesnake, the second time round was the winner for the song Here I Go Again.

First recorded in 1982 for their fifth studio album, Saints & Sinners , the song was written by lead singer David Coverdale and guitarist Bernie Marsden.

During the recording sessions in 1981, the band was facing problems and members began quitting, including Marsden.

Lots of late nights, debt and not feeling committed, band members started quitting and Coverdale put the band on hold.

But in 1982, Coverdale approached Micky Moody to return to finish the album. The song was the first single released, but the album went mainly unnoticed.

Fast forward to 1985, with a new line-up, Coverdale was once again wanting to dismantle the band. Geffen Records told him to take time with fellow band member John Sykes.

The two then worked in France and the US before focusing on the album with two new band members in Vancouver with producer Bob Rock at Little Mountain Sound.

Recorded in the US, Bahamas and Canada in late 1985 and 1986, the self-titled album was released in April 1987, after the news of Coverdale deciding to disband the members once again.

The video showed Coverdale on stage at a piano interplayed with scenes of actress/model Tawny Kitaen displayed on the hood of a Jaguar XJ, trying to entice Coverdale. The two would marry in 1989.

Despite the lack of support by the band, the song and the album were listener favourites and became part of the bestselling albums of the late 1980s.