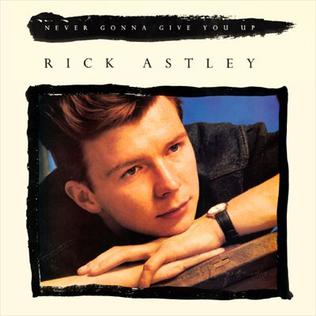 The number one song of summer 1987 still gets regular airplay (in a different form) thanks to an internet meme of the 21st century: Never Gonna Give You Up by Rick Astley.

The first single released from Astley’s debut recording Whenever You Need Someone, the song was written by Stock Aitken Waterman (SAW), a trio of songwriters/producers who produced and wrote the entire album.

Groomed by SAW on how to become a pop singer and managed by the trio, Astley recorded the song on New Year’s Day 1987, and the song was released on July 27, 1987 by RCA Records.

In 1988, the song won for Best British Single at the Brit Awards, while it was in 1988 when the song started climbing the Billboard Hot 100 and hit number one in March of that year. Astley was nominated for Best New Artist at The Grammys in 1989.

The album became a bestseller for Astley, with over 15 million copies sold and the song was reborn in the 21st century with the internet prank ‘Rickrolling’, when urls are reprogrammed to lead from one song back to this song. Youtube did this on April 1, 2008 as a joke, and became the internet sensation of the moment.

A pop culture junkie with a penchant for exploring our planet.
View all posts by Waheeda Harris →
This entry was posted in Pop culture and tagged 1980s, 1987, Billboard Hot 100, debut, England, internet meme, Music, Never Gonna Give You Up, Pop culture, pop music, Rick Astley, rickrollin, single, Whenever You Need Someone. Bookmark the permalink.