Posted on February 7, 2017 by Waheeda Harris 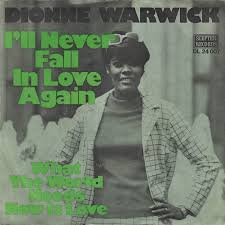 At the beginning of the 1970s, singer Dionne Warwick kicked off the decade with one of her most memorable hits: I’ll Never Fall in Love Again.

Composed by Burt Bacharach and lyricist Hal David, the song was written for the musical Promises Promises, a play based on the 1960 film The Apartment, directed by Billy Wilder.

Warwick chose to cover the song and include it on her album of the same name, which was her 13th studio album, and featured a majority of songs written by Bacharach and David.

Prior to Warwick, Johnny Mathis covered the song in May 1969, making the Billboard Easy Listening charts. Bacharach’s version with a female chorus also made the Billboard charts in June 1969.

But in December 1969, Warwick, who had worked with Bacharach previously, released her version of the song, which hit the charts for the first time on December 27, 1969. The song climbed for the next 11 weeks on the Billboard Hot 100, and in January starting climbing the Billboard Easy Listening charts as well as the soul music charts.

Warwick’s distinctive voice led the song to hit the number one slot in the Billboard Adult Contemporary chart in February 1970.

Although Bacharach lost the Grammy for Song of the Year in 1970, Warwick was nominated for the next year, and won for her version of the song in the Best Contemporary Vocal Performance Female.

Covered by several singers in the past 30 years (Shirley Bassey, Anne Murray, Ella Fitzgerald, Chet Atkins, Elvis Costello, Kristin Chenoweth, Lea Michele), the song still is a signature hit by Dionne Warwick, who version is still one of the most played on radio.