memories of the ’70s – Nickleodeon

Posted on November 1, 2016 by Waheeda Harris 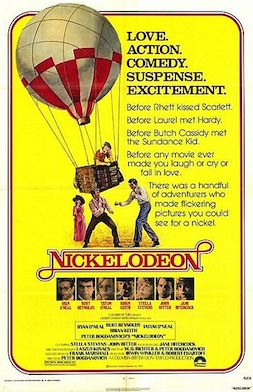 The mid ’70s brought many successes but also brought failures, with one of the year’s biggest flops in the form of Nickleodeon.

Written and directed by Peter Bogdonavitch, the film’s storyline was based on stories the director heard from silent film directors about the way Hollywood had been before the “talkies”.

Starring Ryan O’Neal as Leo Harrigan, a hapless lawyer/writer who becomes a movie director and Burt Reynolds as a Hollywood star, the film plots the life of Harrigan as he attempts to become a successful movie director.

Bogdonavitch had wanted Jeff Bridges and his girlfriend/actress Cybill Shepherd in the film, but the studio said no because his previous two films starring Shepherd hadn’t done well at the box office.

Columbia Pictures didn’t like what Bogdonavitch was doing, and with O’Neal and adding his daughter Tatum O’Neal to the supporting cast, the costs of the film went over-budget, with British Lion Films and EMI Films putting more money into the production budget.

Co-stars on the film included Brian Keith, John Ritter, Stella Stevens, and O’Neal’s son Griffin, and filming was delayed when Reynolds became ill on set, delaying production. Bogdonavitch forfeited $500,000 due to the delay in the film being finished.

At the Los Angeles premiere, guests and critics paid five cents a ticket in homage to the old prices of silent films – but unfortunately the edgy drama wanted by Bogdonavitch and the comedy that the production company wanted became a film no one wanted to see.

The film was released on December 21, 1976 in order to be considered for the Academy Awards. As one of the major movie flops of 1976, the film was made for US $8 million but barely made a third of that in box office release.

As a result, Bogdonavitch didn’t direct any films for three years, and the film disappeared from view. As the New York Times called it “Will Nickleodeon Be His Last Picture Show?”.