memories of the ’80s – I Feel For You by Chaka Khan 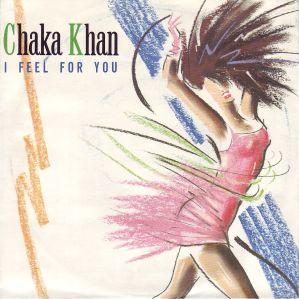 Written by Prince but performed by Chaka Khan, this song became a hit thanks to radio and music video: I Feel For You.

Prince wrote the song in 1979 for his self-titled album, and had offered the song to singer Patrice Rushen.

Khan chose the song for her 1984 album, including rapping by Melle Mel of Grandmaster Flash and the Furious Five and Stevie Wonder on harmonica.

The distinctive opening by Melle Mel saying the singer’s name was a rap style that became part of the mainstream of pop music.

Released in October 1984 by Warner Bros., Khan’s version of the Prince song was a hit, becoming a number three song on the Billboard Hot 100 with its airplay supported by radio stations and because of its music video. The song also was a hit on the Billboard Dance and R&B charts.

With the popularity of rap and hip hip growing, Khan capitalized on the sounds, and did a second version of the music video for the song, showing her with dancers Shabba Doo, Bruno Falcon, Ana Sanchez and Boogaloo Shrimp, all who had performed in the film Breakin’.

Kick starting her own career, Khan’s version stayed on the Billboard Hot 100 for 26 weeks, and Prince was awarded the Best R&B Song by the Grammys in 1985. In 1998, Khan toured with Prince and the duo would perform the song as a duet.

The song was recorded by The Pointer Sisters and by Rebbie Jackson before being recorded by Khan, but it was her who made this song a hit, and part of the 1980s beloved dance songs.