memories of the ’80s – The Color of Money

Posted on November 5, 2015 by Waheeda Harris 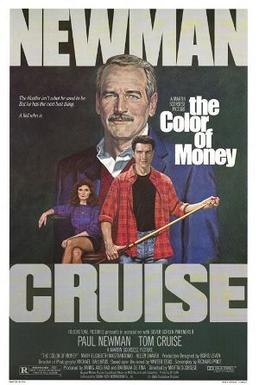 The mid 1980s was the rise of Tom Cruise’s career as an actor, helped along by starring with Paul Newman  in The Color of Money.

Directed by Martin Scorsese, Fast Eddie Felson comes back to the screen in this sequel to The Hustler, based on the sequel by Walter Tevis, published in 1984.

Newman reprises his role as Felson, now older and working as a liquor sales representative, who comes across the cocky potential of young pool player Vincent Lauria (Tom Cruise).

Along with his girlfriend Carmen (Mary Ellen Mastrantonio) and fellow pool shark Julian (John Turturro), Felson takes them on the road to learn how to scam and hustle playing pool.

Felson starts to play again himself, as the conflicts with Vincent not wanting to follow his lead in playing  arise. Coming up against a fellow shark, Felson loses to Amos, played by Forest Whitaker and decides to disappear, leaving Vincent and Carmen with enough money to go to Las Vegas.

Released in October 1986, the Touchstone film, made for $13.8 million hit the box office with rave reviews for Newman’s performance. The film garnered a box office bonanza of $52 million after its first run.

Nominated for four Oscars, Paul Newman was given the Best Actor in a Leading Role by the Academy in 1987, and forever is Fast Eddie Felson.