Posted on November 3, 2015 by Waheeda Harris 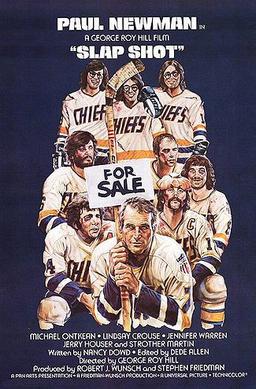 A small movie about an aging hockey team trying to get its last stab at glory became a cult film forever: Slap Shot.

Written by Nancy Dowd, and directed by George Roy Hill, the film was based on the experiences of Dowd’s brother when he played in the minor leagues.

In the 1970s, fans were attracted to the minor leagues because of its rougher style on ice.

Dowd initially had thought about making a documentary, focusing on how these players survived the grind of the minor leagues, focused on a rare possibility to get to the NHL, but was convinced to turn the real life stories into a comedy drama.

Led by player/coach Reggie Dunlop, played by Paul Newman, the Charlestown Chiefs has become a side show, with the manager Joe McGrath paying the players as little as possible and encouraging bad behaviour.

McGrath hires the Hanson brothers, feisty goons who are easily led to drop their gloves at any moment, which discourages Dunlop, who decides he may not play the season.

But the local town mill closes, with most fans now unemployed Dunlop worries the team may close and decides to make the team more aggressive and kickstarts the team’s winning ways and fan support. Michael Ontkean plays Ned Braden, a skilled young player who has to be convinced to be more aggressive on ice.

Dunlop investigates to find out who owns the team as the Chiefs progress through the schedule, winning and eventually landing in the championship finals versus their nemesis, Syracuse Bulldogs.

Filmed in Pennsylvania and New York, the film crew used Dowd’s brother and fellow players in the filming and used the ice rinks and other players of the North American Hockey League for authenticity.

The comedy came from so many directions – pointing fun at the rituals of players, the Canadian domination of the game, the French Canadian culture as well as the endless stream of cursing from all characters.

Released in February 1977, this little hockey film was made for $250,000 but due to its popularity, made US$28 million at the box office. In an interview with TIME Magazine, Newman stated this was one of his favourite movies, and that he had endless fun and kept us his cursing ways after making the film.