Posted on September 3, 2015 by Waheeda Harris In the 1980s, women’s lib may have disappeared, but it didn’t mean that us ladies we’re going to ignore the double standard.

Women wanted to exude power and style, and being feminine and a career woman was all possible.

Even the tables started turning with big brand names, like Charlie on who was in charge:

And not sure what’s going on, but at least the woman is clothed:

And the powerful woman was a way to sell:

And the stereotype was used, but it was done with a bit more subtlety and a dash of humour by Swatch: 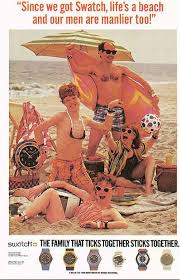 But certain brands kept their eye on a woman’s figure to sell their product, like Budweiser: And then there’s Interlude – an ’80s “fantasy” game for adults:

So although the advertising was changing, it needed more women to get involved. But looking back, its always good to see where we’ve come – and how much farther we still have to go.

A pop culture junkie with a penchant for exploring our planet.
View all posts by Waheeda Harris →
This entry was posted in Pop culture and tagged 1980s, advertising, brands, Pop culture, sexism, stereotypes, women. Bookmark the permalink.