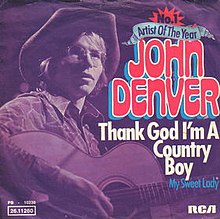 In the mid 1970s, a non-traditional country song hit the top of the Billboard charts as John Denver’s Thank God I’m a Country Boy became one of the most popular songs on radio playlists.

Recorded for Denver’s 1974 album Back Home Again, he recorded a live version of the song at the Universal Amphitheatre in Los Angeles and included it on his 1975 RCA album An Evening with John Denver.

Written by John Martin Summer, a member of Denver’s band who plays guitar, banjo, fiddle and mandolin, he was headed home to Colorado for Christmas and started writing the song thanks to his state of happiness.

Released as a single in 1975, the song climbed the charts, hitting number one on the Billboard Hot 100 in June, a week after hitting the top of the Billboard Hot Country singles chart at the end of May. The song hit number 5 on the Adult Contemporary charts.

At the end of the year, the song was number 10 of the Hot 100 songs of the year and became one of Denver’s signature songs for the rest of his performing career.

And six songs in total were released from this album, all of which hit the Billboard charts – confirming the power of John Denver in the mid 1970s as one of the fave recording artists of the decade.