memories of the ’70s – Madeline Kahn 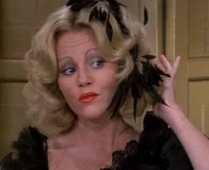 This funny lady became a star in the 1970s thanks to director Mel Brooks, which made her a household name: Madeline Kahn.

Growing up in New York City, Madeline Wolfson went to school on Long Island, studying drama, music and speech therapy, and seeing her Mum later in life start pursuing a life as an actress.

After graduation from college, Kahn went on regular auditions as well as teaching public school to pay her bills. She adopted the last name Kahn, from her stepfather, and soon began to gain parts in Broadway productions.

She became known for her operatic voice, which had been developed while she was in college and worked in a restaurant as a singing waitress.

In 1973 she was part of the cast of Paper Moon with Ryan and Tatum O’Neal, her second film, where she gained an Academy Award nomination for her performance.

After being fired from the film production of the musical Mame, Kahn worked on three back to back films with director Mel Brooks, where she became comedy royalty for her unique style of physical comedy.

In Blazing Saddles (1974), Young Frankenstein (1974) and High Anxiety (1975), Kahn was heralded by critics for her unique roles, which led to her second Academy Award nomination for Blazing Saddles.

She continued to wow audiences with her funny bone in 1978 in Neil Simon’s The Cheap Detective, which was a spoof of classic Hollywood films The Maltese Falcon and Casablanca.

By the end of the decade this comedienne had award nominations, a list of successful films and the undying love of fans from around the planet.